How Naira Sinks to N530 Against US Dollar 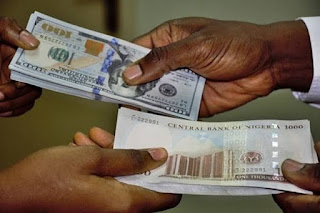 How naira sinks to N530 against US Dollar to a fresh record low on Thursday amid the lingering scarcity of foreign exchange in Nigeria.

The value of the naira fell against the US currency on at both the parallel market and the Investors’ and Exporters’ foreign exchange window.

No less than 55 per cent to 60 per cent of Nigerian forex transactions are traded at this window, which is used by the CBN and most exporters and investors, according to Financial Derivatives Company Limited.

“It serves as not only a source of price discovery but also a barometer for measuring potential and actual CBN intervention in the market.

Some of the exchange rate determinants are balance of payments, capital inflows and trade balance,” the FDC said.

On Tuesday the naira extended its decline on Monday, sliding to an all-time low of 527 against the dollar at the parallel market.

The naira had strengthened to 506/$1 on August 4 after plunging to 525/$1 at the parallel market on July 28, a day after the Central Bank of Nigeria stopped foreign exchange sales to Bureaux de Change.

The CBN Governor, Mr Godwin Emefiele, had on July 27, at the end of the Monetary Policy Committee meeting, announced the stoppage of forex sale to the BDCs, saying they had turned themselves into “agents that facilitate graft and corrupt activities of people who seek illicit fund flow and money laundering in Nigeria.”

In a related development, the country’s external reserves have risen above $34bn for the first time in more than two and a half months, according to the CBN. 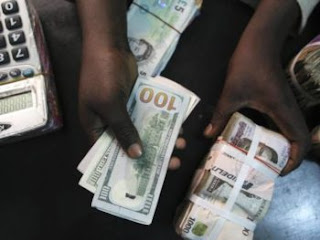 Nigeria let the naira weaken to a record low against the dollar on the official market on Friday, according to traders, who said this could be a move by the central bank to unify multiple exchange rates.

It weakened further on the black market, traders said.

“What the central bank is saying is that the (OTC) spot rate will be the official rate because that’s where the largest volumes trade,” one currency trader at a major Nigerian bank told Reuters.

Nigeria operates multiple currency regimes, which frustrate businesses and have prompted calls from the World Bank for the rates to be unified to attract investment.

Rising dollar demand has put pressure on the naira as providers of foreign exchange, such as offshore investors, exited after the COVID-19 pandemic triggered a fall in global oil prices.

Central Bank Governor Godwin Emefiele in February said the currency was trading at 410 naira on the official market while the government has been using that rate for its business as it tries to boost earnings from crude sales, its main export.

The World Bank has linked approval of a $1.5 billion budget support loan to currency reforms.

The central bank had been trying to unify the rates and boost the dollar supply through direct interventions.

It revised the futures rate on the naira upwards last month to ease pressure on the currency after quoting the 150-day futures contract at 435.81 naira, in its first dollar sales to foreign investors this year.

The bank is due to hold its interest rate setting meeting later this month with economic data on inflation and first quarter growth figures expected from next week.

It has kept rates on hold to support the economy hobbles by lower oil prices and impact of COVID-19 pandemic but dollar shortages have been contributing to rising inflation, a key source of concern for the central bank.

‘I can’t simply afford to give my children what they really need in terms of food,’ said Feyintola Bolaji, a mother of three in her 50s based in Nigeria’s southwestern city of Ibadan.

Nigerian merchant Feyintola Bolaji, struggling with stagnant earnings and dwindling sales, is now being squeezed by the ever increasing prices demanded by her food suppliers, leading her to cut down on the amount she can put on her own family’s table.

Bolaji’s belt tightening is being shared by millions across Africa’s most populous nation. Not long after Nigeria’s statistics agency revealed that one in three people in the continent’s largest economy were unemployed, on Thursday it announced that food inflation has accelerated at the highest pace in 15 years, compounding the misery of many households.

“It is really bad, I can’t simply afford to give my children what they really need in terms of food,” said Bolaji, a mother of three in her 50s based in the southwestern city of Ibadan. “I try to make them get the nutrients they need as growing children, but it is not enough,” she said, adding “I have had to cut down on meat and fish.”

Insurgency, unrest, and the stand of President Muhammadu Buhari’s government on food imports in a nation where more than half the population lives on less than $2 a day are worsening food insecurity in the African country.

Meanwhile, the coronavirus pandemic has robbed 70% of Nigerians of some form of income, according to a Covid-19 impact survey published by the statistics agency last month.

Food inflation rose to 22.95% in March, caused by wide-ranging price increases across items such as cereals, yam, meat, fish and fruits.

Those soaring costs have been in part blamed on a worsening conflict between farmers and herders in Nigeria’s agriculture belt that Buhari has struggled to quash.

The unrest, combined with the more than decade-long Boko Haram insurgency in the north, a weakening currency and higher fuel prices have also contributed to rising food prices, according to SBM Intelligence, a Nigerian research firm.

What is your opinion on the recent falling of Naira?