September 06, 2015
As a friend and ardent follower of NASA, I bring to you, the handing over of the international space station by expedition 44 to expedition 45. I am having issues uploading the videos...will sure upload it before today runs out, so check back and do bear with me. 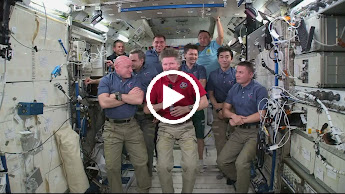 September 5, 2015: The reins of the International Space Station were passed from Gennady Padalka of the Russian Federal Space Agency (Roscosmos) to NASA’s Scott Kelly during a ceremony on the orbital outpost on Sept. 5. Padalka will return to Earth Sept. 12, Kazakh time, in the Soyuz TMA-16M spacecraft with visiting crew members Andreas Mogensen of the European Space Agency and Aidyn Aimbetov of the Kazakh Space Agency (Kazcosmos), who arrived in a fresh Soyuz spacecraft on Sept. 4 with cosmonaut Sergey Volkov. Kelly, who will be the station commander for Expeditions 45 and 46, and Russian cosmonaut Mikhail Kornienko of Roscosmos, are nearing the halfway mark of a year-long mission on the complex, gathering valuable biomedical data that will be used in the planning for a mission to Mars.